Solution of the diffusion equation in a bounded domain

Let's see how this simple reasoning compares to a more careful calculation.

Since the diffusion equation is linear, any linear combinations of these elementary solutions is a solution: $$ P(x,t) = \sum_{n=0}^\infty a_n p_n(x,t) $$ This solution will respect the boundary conditions at all times. The coefficients \(a_n\) need to be chosen such that the initial conditions is full-filled (if this looks similar to a Fourier transform to you, you are exactly right!).

When including only the first couple of modes, we approximate the initial condition as follows: 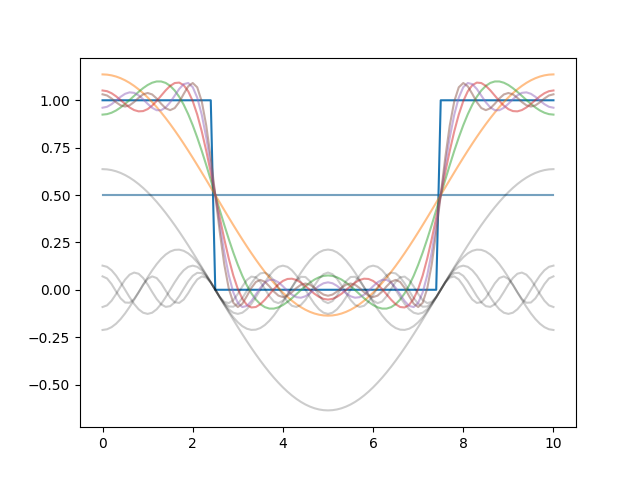 The modes corresponding to large \(n\) decay very fast, and the wiggliness of the solution goes away very quickly:

The script generating these figures is available here.

Above we discussed how diffusion coefficients can be measured by FRAP. In fact, there is simple law that relates the diffusion constant to other properties of the medium and the diffusion particles: this law is called the Stokes-Einstein relation. Before we derive it, lets take a moment to think about which quantities might matter:

How can we combine these quantities to give us a diffusion constant with units \(length^2/time\)? Clearly, \(\eta\) has to be in the denominator and \(kT\) in the numerator. Their ratio has the following units:

Let's see how this holds up when analyzing the problem more carefully. Einstein considered diffusion in a general potential. We will assume here we have a harmonic potential \(U(x) = \alpha x^2/2\), i.e., a force \(F = \alpha x\) is pulling the particle back to \(x=0\). The motion of the particle is governed by the diffusion equation

where \(\mu\) is the mobility of the particle, i.e., the relationship between velocity and pulling force in viscous media. Mobility is the inverse of friction. At steady state, the distribution of the particle is

However, the Maxwell-Boltzmann distribution requires that the equilibrium distribution is also proportional to \(e^{-\alpha x^2/2kT}\). Hence we find

Next, we need to consider how the mobility is related to the geometry of the particle and the solution. This is given by Stokes' law that relates the friction force to the size of the sphere and the viscosity:

Deriving this is a standard exercise in fluid dynamics, but nothing that we will go into here. Have a look at the wikipedia page for Stokes' law if you are curious.

The remarkable fact about this equation is that \(\eta\) can be measured at macroscopic scales and the microscopic structure does not feature explicitly. Nevertheless, together with the molecular radius and the energy scale \(kT\), it determines the diffusion coefficient of microscopic particles. Our intuitive scaling ansatz above was off by the factor \(6\pi\), but did capture the essence of the problem.

The viscosity of water at room temperature is

The cytosol typically has a 3fold higher viscosity. So let's see how well the numbers given above compare to the prediction (Stokes' law assumes a perfect sphere, so we don't expect perfect agreement).

So far all our calculations were done in one dimension while most examples we considered were in three dimensions. In fact, in biological systems diffusion is important in 1,2, and 3 dimensions.

Luckily, there are only a few differences when going from one to two to three dimensions. The random kicks a particle experiences from the surrounding molecules are independent in different directions and we can in principle look at each direction separately. The latter is the reason why looking only at one dimension has gotten us so for. Going through the same motions for multiple dimensions as previously for one dimension we arrive at a multi-dimensional diffusion equation

For constant advection this has the solution

Without advection (\(v_i=0\)), the typical distance traveled after time \(t\) is \(\Delta x = \sqrt{2dDt}\). This simply an example of the well known fact that variances add and standard deviations grow as square root.

One important difference, however, is the number of times a molecule returns to the vicinity of the origin at \(x_i=0\). In one dimension, this happens infinitely often, in two dimensions this happens but sometimes involves long waits, and in three dimensions this is not guaranteed to happen. (It is impossible to get lost in 1d, there is hope in 2d, and you rarely find home when lost and drunk in 3d).

How fast do things move?

The typical genetic energy of every particle is \(\frac{mv^2}{2}\approx \frac{kT}{2}\) (we are ignoring the factor of 3 for each spatial dimension). The velocity is therefore given by

If we compare the speed to the diffusion constant, we can work out how often the particle changes direction. The mean free path (distance without substantial change of direction) is given by \(\delta x = \delta t v\). The number of steps in time \(t\) is \(n = t/\delta t\) and the total displacement is then