Back to the main page.

PoissonNTF is an extension of the PoissonNMF plugin for ImageJ. In contrast to the NMF plugin, NTF combines the data from multiple excitations. Multiple excitations allow to image and decompose more fluorophores than single excitation imaging. As PoissonNMF, PoissonNTF employs a non-negative factorization algorithm generalized to higher dimensional data sets (Tensors) [1]. The details of the algorithm are discussed in [2]. Step-by-step tutorial using an example with 3 dyes can be found here.

As of now, PoissonNTF works only for data acquired with Leica confocal microscopes (and has only been tested for Leica SP2). The user is expected to choose one image from the experiment. The plugin then reads the accompanying text file with the settings and builds stack of images for each excitation. The channel and excitation wavelength are read from the meta data in the Leica text file. It is important that the emission channels used in the different excitations overlap and that the overlapping channels have exactly the same boundaries.
Example:
Excitation 1: 470-490nm, 490-510nm, 510-530nm, 530-550nm.
Excitation 2: 510-530nm, 530-550nm, 550-570nm, 580-610nm.
top

The workflow of Poisson NMF is very similar to PoissonNMF. Upon starting the plugin, the user has to choose which kind of data he/she wants to analyze. Currently, only Leica data is implemented. The user has to select one of the images of the experiment, and the plugin will open all relevant images and group them into stacks according to excitation wavelength. After opening of the images, the user is guided through a series of dialogs.
top 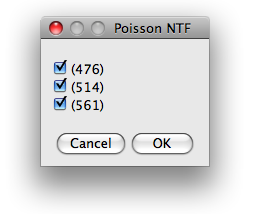 The first dialog presents the excitation wavelength found in the configuration file and offers the choice which of them are to be used for further analysis.

Next, the user is asked for the number of labels that contribute to the image stack. This number is restricted to the range 1-10. top

After specifying the number of sources, the user is prompted for parameters needed for preprocessing of the data, initial conditions and runtime options.

Number of iterations and subsampling. To speed up convergence, the poissonNMF applies the update rules in several stages to subsamples of the data. The estimates for the spectra obtained with one subsamble are used as initial conditions for the next larger subsample. The number of such stages can be specified in subsamples field. From one subsample to the next, the amount of data used by the algorithm is increased by a factor of 10 in such a way that the last subsamples comprises the entire data set. The total number of times the iterative update rules are applied to the data can also be specified. The number of iterations for larger subsamples is smaller (a factor 2 between successive subsamples). 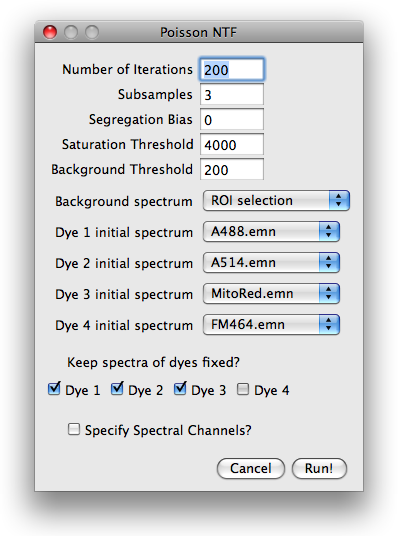 Saturation threshold. Saturated or nearly saturated pixels have distorted emission spectra and therefore have to be excluded from the analysis. If the signal in any channel at a certain pixel is above this parameter value, the pixel is excluded.

Background threshold. Very faint pixels carry little information and are likely dominated by noise, autofluorescence or similar contaminants. It is therefore advisable to limit the spectra estimation to reasonably strong pixels. Any pixel, whose intensity is below this threshold in every channel is therefore excluded. This thresholding is applied after the constant background is substracted.

Similar choices are available for the initial spectra:

If the user selected items that require further user input such as ROIs or numbers, additional dialogs will appear after closing the parameter dialog.

Keep spectra fixed? If some spectra are known accurately, one can fix them during the optimization and iterate only the remaining spectra. To keep the spectrum of a dye fixed, check the appropriate boxe. If all dyes are kept fixed, poissonNTF updates only the concentrations and thereby produces a non-negative iterative linear unmixing of the signal. This unmixing differs from standard least squares unmixing by assuming Poisson noise.

After closing the parameter dialog and providing the optional input, the plugin can decomposes the image stack. While the plugin is running, it continuously displays the current excitation and emission spectra and the progress of the calculation in ImageJ toolbar. The plugin can be cancelled at any time. Furthermore, the current spectra can be used to produce a least square solution of the entire stack.

Once poissonNTF has completed the optimization loop, it displays an image stack containing the label distributions. Different labels correspond to different values of the third dimensions, with all other dimensions being the same as the input data stack. PoissonNTF opens a dialog with six buttons for further processing of the results. The button RGB overlay allows to produce a RGB of the current slice of the stack. The user is asked for an assignment of dyes to color channels.
The button background map presents the user a RGB image of the current slice, pixels classified as background are blue, those used for poissonNTF are green and saturated pixels are red. Furthermore, the user can save the estimated spectra and display the background spectrum. top

PoissonNTF can use literature spectra or spectra determined in previous runs, for example as start spectra or as fixed spectra while optimizing other unknown spectra. For a spectrum to be available in PoissonNTF, it has to be placed in the folder SpectraLibrary located in the plugins folder of ImageJ. The files are assumed to be text files with the wavelength in column one and the emission in column two, conform with the output format of PoissonNTF. Files containing emission spectra have to end on .emn. top